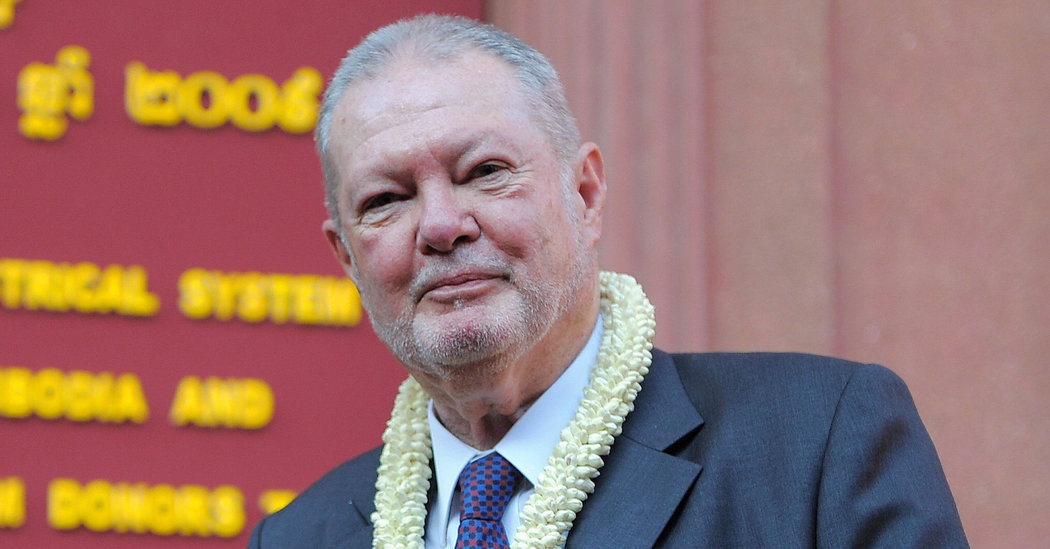 Investigators have charged Douglas A. J. Latchford, a leading expert on Khmer antiquities, with smuggling looted Cambodian relics and helping to sell them on the international art market by concealing their tainted histories with falsified documentation.

In a federal indictment unsealed on Wednesday, Mr. Latchford, 88, was accused of having served for decades as a “conduit” for Cambodian antiquities that had been excavated illegally from ancient jungle temples during unrest in the country starting in the mid-1960s, with the beginnings of the Cambodian civil war.

According to a news release from the United States Attorney’s Office for the Southern District of New York, Mr. Latchford, a dual citizen of Thailand and the United Kingdom, falsified invoices and shipping documents to make it easier to sell those looted artifacts to major auction houses, dealers and museums.

The prosecutors presented in its court papers a sordid and alternative perspective on Mr. Latchford, who had been hailed in Cambodia as a protector of the country’s relics, having donated rare artifacts and money to the national museum in Phnom Penh. In 2008, he was honored with the country’s equivalent of a knighthood. He is also the co-author of three books — “Adoration and Glory: The Golden Age of Khmer Art,” “Khmer Gold” and “Khmer Bronzes” — that are foundational reference works for experts.

The United States government officials depicted him instead as a major player in a transnational criminal network dealing in cultural property who started supplying Western institutions and private collectors with looted antiquities as long ago as the 1970s.

Mr. Latchford could not be reached for comment Wednesday. An aide who answered his phone in Thailand said Mr. Latchford is in ill health and has been hospitalized in Bangkok for several months.

The indictment charges Mr. Latchford with conspiracy to commit wire fraud and smuggling, among other charges, the most serious of which each carry a maximum sentence of 20 years in prison. A spokesman for the United States attorney’s office, Nicholas Biase, declined to comment on whether an extradition request for Mr. Latchford would be made.

They detailed in their news release his involvement with high-profile cases such as that of a major antiquity that was withdrawn from an auction at Sotheby’s in 2011 when a Cambodian official complained that the object had been looted. The artifact, a 500-pound, 10th-century sandstone statue of a mythic warrior, known as Duryodhana, is thought to have been looted from a temple in a Cambodian jungle. Prosecutors said that Mr. Latchford exported the stone figure from Cambodia in 1972, but when Sotheby’s was seeking to verify the provenance of the artifact, Mr. Latchford told the auction house that he had the statue in London in 1970 — then changed his story to claim that he had never owned it at all.

Sotheby’s and its consignor agreed to return the Duryodhana to Cambodia after a court battle in which the United States government sided with Cambodia.

In 2013, the Metropolitan Museum of Art also agreed to return two statues from the same site after Cambodian officials presented evidence that they had been smuggled out of the country during the tumult of civil war in the 1970s. The statues had arrived at the museum in four separate pieces — two heads and two torsos — in a series of gifts between 1987 and 1992. Mr. Latchford was the donor or part-donor for three of them.

For years Mr. Latchford has been a character at the margins of the government’s investigation of looting in Southeast Asia. In 2016, he was mentioned in a federal criminal complaint as an unindicted co-conspirator who had helped a prominent New York gallery owner falsify documents associated with Cambodian artifacts so that they would be easier to sell on the international art market. But this is the first time that he has been formally charged.

Geoffrey S. Berman, the United States attorney in Manhattan, said Mr. Latchford had “built a career out of the smuggling and illicit sale of priceless Cambodian antiquities, often straight from archaeological sites.”

Tess Davis, an expert on Cambodian antiquities law, said “the name Douglas Latchford casts a long shadow” over the fate of Khmer treasures that have been smuggled and sold abroad since the Vietnam War era.

“As we are seeing today in Iraq and Syria, a generation ago in Cambodia, brutal civil war led to the wholesale plunder of a great ancient civilization,” Ms. Davis said.

Prosecutors describe Mr. Latchford as having provided invoices that misrepresented identifying details of artifacts, such as age or country of origin, to United States Customs and Border Protection in order to hide the fact that they were looted.

“Frequently, Mr. Latchford listed the ‘country of origin’ as ‘Great Britain’ or ‘Laos,’ rather than Cambodia,” the news release said, “and often described the objects as ‘figures’ from the 17th or 18th century” rather than dating to the Khmer Empire, which ended in the 15th century.

He is also accused to directing others to create false provenance documents for him.

In previous interviews, Mr. Latchford has denied any wrongdoing, defending his collecting practices as the norm at a time when there were lower standards for provenance and sales documents associated with cultural treasures. In 2012, when the United States government had tied him to the transportation of the Duryodhana, he said that Westerners like him who had acquired Southeast Asian relics amid the wars in Cambodia and Vietnam should be seen as having rescued objects that might have otherwise been destroyed or forgotten.

“If the French and other Western collectors had not preserved this art, what would be the understanding of Khmer culture today?” he said.