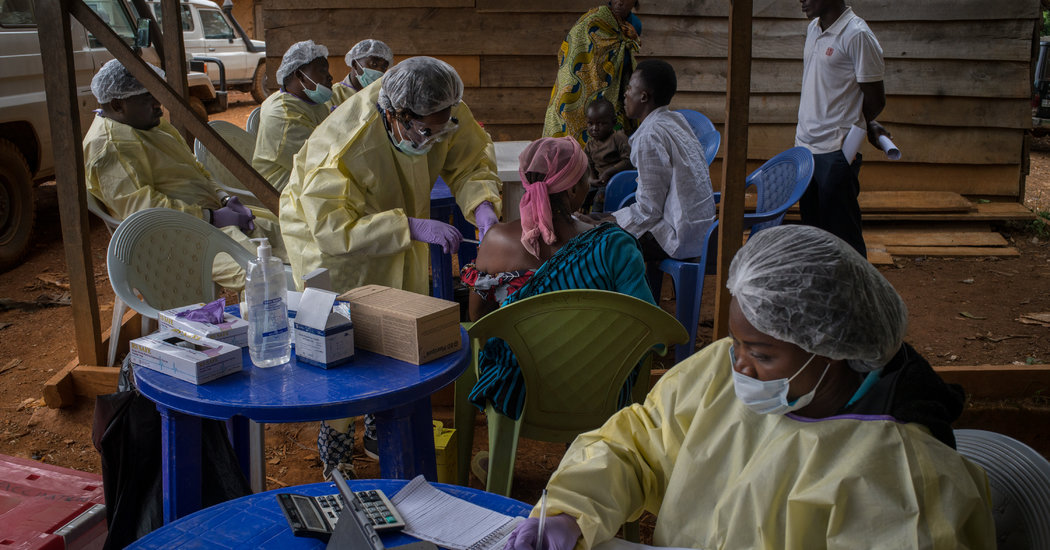 BENI, Congo — Rebels have attacked and killed several health workers responding to Ebola in eastern Congo, the head of the World Health Organization said on Thursday, an alarming development that could cause the waning outbreak to regain momentum in an area that has been the site of heavy fighting.

“We are heartbroken that our worst fears have been realized,” the official, Tedros Adhanom Ghebreyesus, said on Twitter.

Warnings had been posted earlier demanding that the health workers leave or face “the worst,” he said.

Health workers trying to contain the second-worst Ebola outbreak in history have been targeted in the past, but the current outbreak has been described by some observers as more complicated than any other. Several rebel groups are active in the region, and local officials have said that some of the insurgents believe that the reports of Ebola are a political trick.

“Imagine, a doctor leaves home in the U.S. or elsewhere to come sleep in a tent to help save us from this scourge of Ebola and yet poorly educated young people want to attack him,” said Fiston Kamango, a youth leader in Biakato. “It is very deplorable.”

In a second attack, Allied Democratic Forces rebels killed a civilian overnight in Mangina, a rural community in Beni territory, according to local official, who added that the target was not the Ebola center but the local population.

The city of Beni, where residents outraged by repeated rebel attacks stormed the local United Nations peacekeeping base, has been the site of unrest. With residents demanding more protection, the World Health Organization evacuated 49 of its workers there, leaving 71 in place.

The Ebola response was put on lockdown in Beni, dismaying health experts who say every attack hurts crucial efforts to contain the deadly virus. Most recent new cases have been reported in the newly targeted communities of Biakato, Mangina and Beni.

The number of cases had been dropping in the yearlong outbreak, which has killed more than 2,100 people and was declared a global health emergency earlier this year. Several days this month, zero cases were reported, but cases have surged after attacks on health workers and facilities.

In one example of how any pause can sharply affect Ebola containment efforts, the World Health Organization has said that no one in Beni could be vaccinated against the virus on Monday. The health agency could previously trace more than 90 percent of contacts of infected people in the city, but that figure has dropped to 17 percent, a United Nations spokesman said on Tuesday.

Residents have accused Congolese and United Nations forces of failing to do enough to protect civilians from the rebels who fight for control of the region’s vast mineral wealth. The Allied Democratic Forces alone have been blamed for the deaths of more than 1,500 people in and around Beni in the past four years.

After an emergency meeting on Monday, President Felix Tshisekedi decided to allow joint operations between Congolese and United Nations forces in Beni following the protests that also burned the town hall.

Far from the capital, Kinshasa, some traumatized residents in the densely populated border region near Uganda and Rwanda are wary of outsiders, further complicating the containment work in a part of Congo that had never recorded the Ebola virus before.

Despite two promising new Ebola vaccines, health workers continue to battle misinformation and reluctance to seek treatment for the virus that is largely spread via close contact with the bodily fluids of infected people, including the dead.

In addition, many local health workers have been recruited to work on the Ebola response, leading to shortages of trained people to deal with other serious health issues such as an even deadlier measles outbreak and malaria, the medical charity Doctors Without Borders said in a statement.