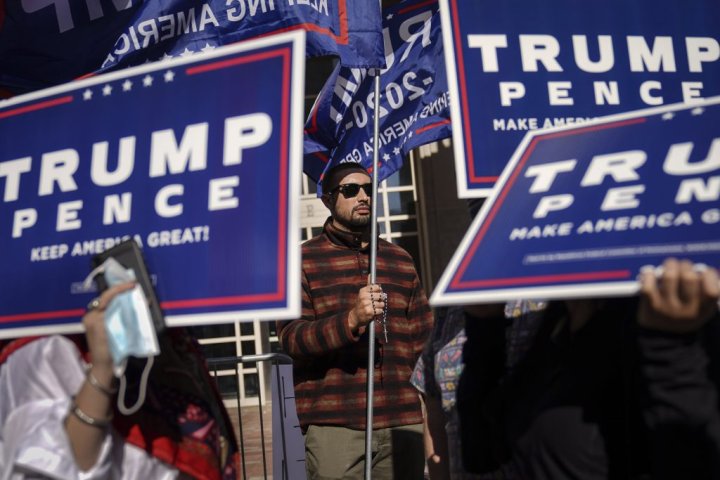 A texting company run by one of U.S. President Donald Trump’s top campaign officials sent out thousands of targeted, anonymous text messages urging supporters to rally where votes were being counted in Philadelphia on Thursday, falsely claiming Democrats were trying to steal the presidential election.

The messages directed Trump fans to converge at a downtown intersection where hundreds of protesters from the opposing candidates’ camps faced off Thursday afternoon. Pennsylvania is a crucial battleground state where former Vice-President Joe Biden’s jumped ahead Friday and in a televised address later predicted a victory that would give him the presidency.

“This kind of message is playing with fire, and we are very lucky that it does not seem to have driven more conflict,” said John Scott-Railton, senior researcher at the University of Toronto’s online watchdog Citizen Lab. Scott-Railton helped track down the source.

The texts were sent using phone numbers leased to the text-messaging platform Opn Sesame, said two people familiar with the matter who spoke on condition they not be further identified. The company’s CEO is Gary Coby, the Trump campaign’s digital director. It provides text-messaging services to GOP clients including the Republican National Committee.

“ALERT: Radical Liberals & Dems are trying to steal this election from Trump! We need YOU!” the text said, directing recipients to “show your support” on a street corner near the Philadelphia Convention Center where votes were being counted and tensions were running high.

A top Trump campaign official, speaking on condition of anonymity, said the message did not come from the campaign. Because Opn Sesame is used by multiple customers, none of whom the company would identify, it could not be determined exactly who sent the message. Coby declined to comment.

Opn Sesame’s connection with the messages was first reported by The Washington Post.

Among those who received the rallying text was Chris Bray, who lives in rural Bucks County, about 25 miles outside Philadelphia.

A registered Independent who said he voted for Biden, Bray said he was very surprised to see the message pop up on his phone since he never signed up for anything related to the Trump campaign.

“I actually texted a number of other friends to say `hey, have you guys been getting robo-texts like this?”’ Bray said Friday. “It was a call to action. It borders on that the rhetoric that we’ve been hearing for months now and that’s really dangerous if you get the right people together with a slight screw loose, we just don’t know what can happen.”

Later Thursday night, two men were arrested near the convention centre for carrying loaded handguns without a permit, Police Commissioner Danielle Outlaw said. District Attorney Larry Krasner said there were no indications they were part of an extremist group. Their vehicle bore a window sticker for the right-wing conspiracy theory QAnon and an AR-style rifle and ammunition inside, Outlaw said.

After being notified, Twilio shut down the numbers, saying in a statement that the texts “were sent without consumer opt-out language, which is in direct contravention of our policies.” A company spokesman declined further comment.

About 80 million political text messages have been sent daily since September in the U.S. — many of those from the Trump camp echoing his baseless claims that Democrats were trying to steal the election, said RoboKiller’s Porter. They are highly targeted.

Political text-messaging campaigns can exploit the same flaws in telecommunications infrastructure that let robocallers hide their origin. They can spoof the numbers they call from and auto-blast thousands of texts with a single mouse click.

Opn Sesame has earned millions as a hub of text-messaging efforts for the Trump campaign and the Republican National Committee this election cycle, said a digital Republican strategist, who spoke on the condition of anonymity for fear of political retribution.

Facebook and Twitter cracked down on disinformation in the runup to the election, making text messaging and robocalls more attractive to those seeking to spread false and sometimes dangerous messages directly to voters via their phones.

“The extent to which these companies are relying upon loopholes in the law and a lack of regulation in this space has really staggered me,” said Sam Woolley, a misinformation and computational propaganda researcher at the University of Texas at Austin.

“They really want to circumvent the need to rely social media firms which is why they are using these private mechanisms,” he added. “They are using tech that we don’t think of as particularly new, texting, calling, but using them in ways that are very Machiavellian.”