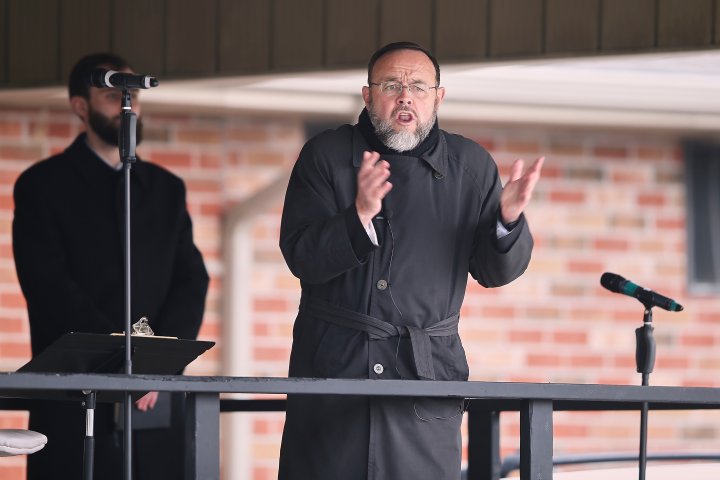 A controversial local pastor is facing an additional charge under the Reopening Ontario Act after officers with Aylmer, Ont., police were met by dozens of singing congregants last week as they served a summons relating to a previous gathering.

Police had attended the Church of God on John Street in the town on Jan. 6 to serve a summons for a church service held on Dec. 27, a gathering which police say exceeded the permitted number of people allowed under the act, implemented as a result of the coronavirus pandemic.

Police had attempted to serve the summons to Henry Hildebrandt, but Hildebrandt contacted police by phone and requested he be served the summons at the local church, police said in a statement which did not name the pastor.

When officers arrived at the church, they were met with a crowd of approximately 100 people in the parking lot, police said.

Video of the incident posted online by the pastor shows a large unmasked crowd singing as an officer approaches Hildebrandt to serve him the court summons.

Hildebrandt can be seen disputing the summons, which he refuses to take.

As a result of that Jan. 6 gathering, Hildebrandt is now facing another charge under the Reopening Ontario Act for hosting an event whose capacity exceeded the number permitted.

Officers served Hildebrandt the summons for the Jan. 6 gathering two days later, according to a video posted by the pastor.

Hildebrandt can again be seen debating with officers about the summons, which he again refuses to take. In the video, Hildebrandt charges that it had been police who organized the Jan. 6 meeting as they wanted to deliver the previous summons.

Drive-in services are permitted under the provincewide shutdown that started Dec. 26, however the number of people allowed to attend is limited.

Under the provincewide shutdown, religious ceremonies are limited to a maximum of 10 people both inside and outside, and physical distancing must be adhered to.

Read more: Dec. 31, 2020: Aylmer police prepare to lay more charges against Church of God in case of another large service

Hildebrandt is also facing a charge under the Reopening Ontario Act for attending a large rally in London in November that was held opposition to COVID-19 pandemic restrictions.

Hildebrandt and the Church of God have been vocal opponents to measures and restrictions put in place during the pandemic.

The church made headlines early in the pandemic for hosting drive-in services in the church’s parking lot that defied coronavirus-related restrictions and seemingly ignored warnings from local police.

Hildebrandt himself has appeared at various anti-restriction rallies in southwestern Ontario, including the one in London for which he was later charged, as well as a rally in Aylmer that drew some 2,000 people to the town.

The 57-year-old also travelled to Toronto in late November to support Adam Skelly, the owner of Adamson Barbecue, who was arrested by Toronto police after repeatedly breaking health regulations imposed by the city and province.

Hildebrandt’s son, Herbert, is also facing charges, albeit of a criminal nature.

The 37-year-old was charged by Ontario Provincial Police in mid-December after he allegedly assaulted former Malahide Township Councillor Jack Dykxhoorn, 84, in an altercation that occurred on Dec. 10.

Officers had attended the church to serve Herbert a summons for hosting an outdoor gathering exceeding the limit as outlined in the Reopening Ontario Act.

According to the London Free Press, a group of men surrounded a police cruiser at the end of the church driveway, shouting at the officer inside and preventing him from leaving.

— With files from Andrew Graham and Sawyer Bogdan