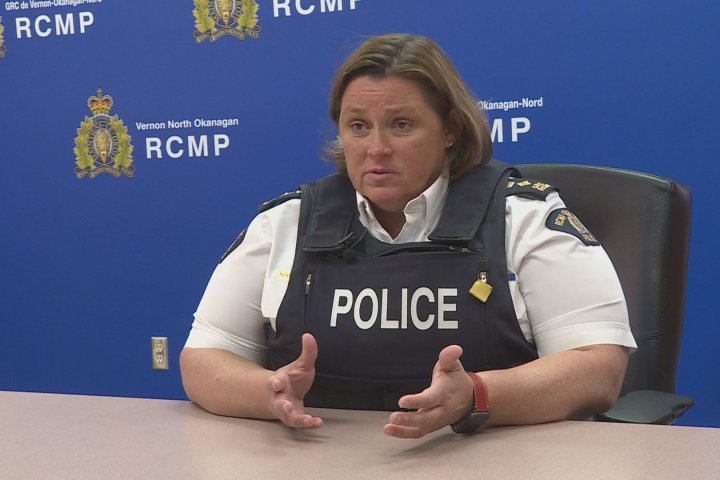 Currently, RCMP members in the Okanagan are often being called to respond to mental health events.

The Vernon/North Okanagan detachment says its members were involved in at least 287 mental health responses in the first four months of the year.

“A lot of the calls we are coming to, there is not basically any public safety concern, it’s maybe someone who is feeling suicidal, someone who is maybe reaching out for help,” said Supt. Shawna Baher, the head of the detachment.

“We are not trained in all mental health issues. A lot of time you have mental health and addiction issues that are co-occurring. We want to be able to bring the best person possible. Is it the police? Not necessarily, but also we can’t abdicate our role in this. There is often a public safety component, said Baher.

“I find for most things, whether it be the opioid crisis [or] the mental health calls, we work better [as] a group than we do in silos…We need to all come to the table and basically work on getting the best service for the person.”

Read more: Looking after your kids’ mental health during COVID-19: Be present, be aware

“We have to wait sometimes many hours with that individual in the hospital until they are seen by a physician…a lot of our communities in the Interior are small so if we take one or two policemen out of a community we don’t leave policing there,” Baher said.

So Baher said police are in discussions with Interior Health about possible regional improvements to mental health calls, an effort that is currently in a brainstorming phase.

Police and health officials are looking at what’s been done in other jurisdictions, including Saskatchewan.

“They are doing a pilot where they are having a mental health nurse actually embedded in that operations center,” Baher said.

The detachment commander sees benefits to that approach.

“Wouldn’t it be great if the nurse was saying, ‘Hey, guess what, this isn’t a police matter. We have this person supported in our system already. We have the ability to have someone go out and see them first thing in the morning,’” Baher said.

“If you are living with a mental health disorder or you are in crisis and it becomes a police incident rather than a health incident that increases the likelihood that symptoms and behaviours could get worse instead of getting better … there is a lot of better approaches to take and we are really pleased to see here in our community, in Vernon, that work being done,” said Julia Payson, executive director of the CMHA’s Vernon and district branch.

“If there is no community safety issue then that should be a civilian lead response, that should be something that is lead by health community agencies that can partner with them to provide the health resource that person in crisis might need,” Payson said.

Interior Health didn’t make anyone available for an interview but confirmed in a statement that it is ‘exploring options” with RCMP “to improve crisis response throughout the Interior.”

There’s no word yet on a timeline for when changes could be implemented.

— With files from Beatrice Britneff